It’s been a rough couple of weeks at the Herrick Abode*. I’ll try not to dump all at once, but we’ll start with the story of our sad rooster.

You’ve all seen Chief before, he’s a gloriously red rooster. 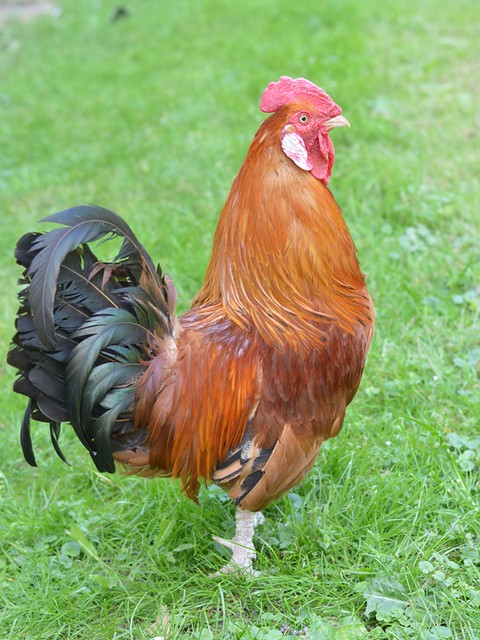 And he’s always been a good rooster too. Takes care to share treats with all his hens. Helps them find the best nesting nooks. Never attacks his humans. Stands up to the fox in the yard.

Oh yeah, that last part is why he’s a sad rooster these days. Apparently, we have a resident fox. We’d seen him once early this spring, but foolishly thought we’d run him off the property. But A week or two ago I came home to this 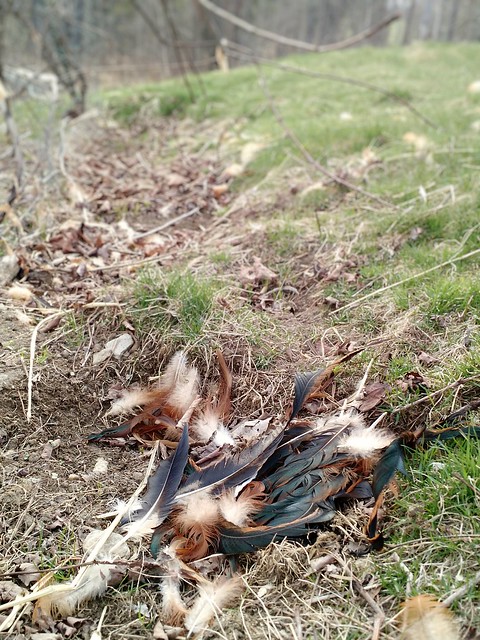 And not just here. There were poofs of red rooster feathers all over the front acre. And a very sore, beat up looking rooster lurking around his coop. Poor guy clearly fought the fox and while he didn’t quite loose, he didn’t exactly win either. Our hens are all gone. 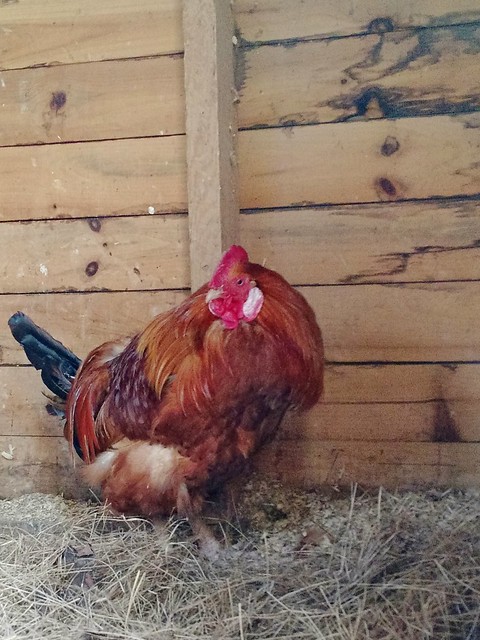 He’s spend the last week recuperating. He’ll have a nasty scar on his back. But after several days of sleeping in the clean straw he’s back on his perch and I’m finally sure he’s going to pull through. He’s headed back to our friend’s house where he hatched to rejoin her flock. He’ll have some new hens to protect and care for soon.

*Inside joke. Our real estate agent calls our house an abode. I would never have thought of that one myself…

Why does this chicken look so cranky? 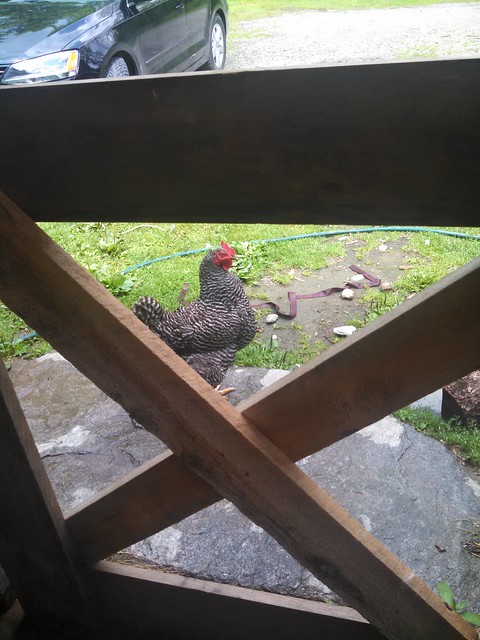 Because access to her favorite hang-out has been revoked. We had a new porch built last fall (but I should note: not sided or roofed…) And ever since the decking has been the chickens’ favorite spot to stand around. And poop.

We finally got the siding hung up this weekend! And then we made a gate. 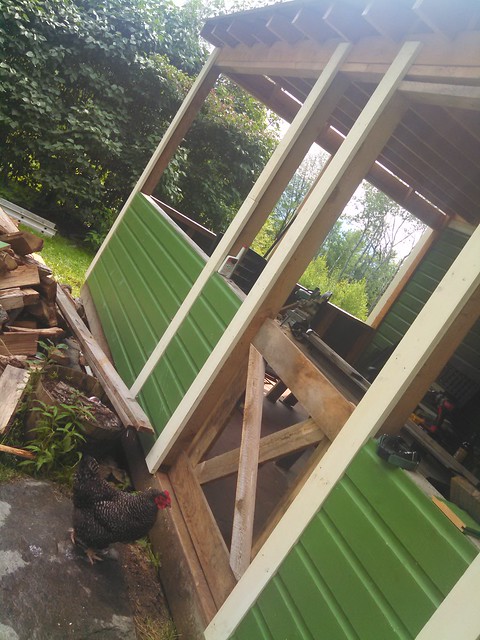 And the day after the poor birds spent a surprising amount of time standing on the stoop, looking confused.

They’re free range birds. The could go literally anywhere else. I refuse to feel badly for not letting them poop on the porch. 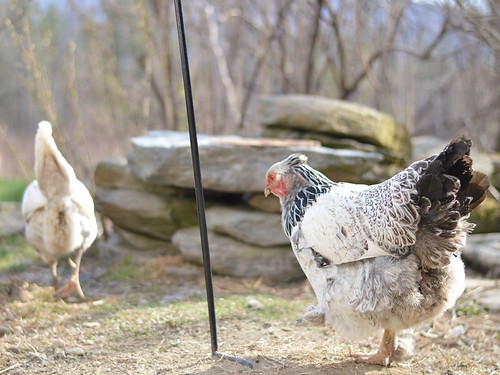 The poor chickens have been all cooped up this winter. Well, I don’t think they think they’re “poor” because if you open the door for them to come outside they look at you like you’re crazy*.

But last week their coop got a little less, um, cooping? Coop-like? What I’m trying to say is the door blew apart on a windy week day night. And the short days combined with the day job means the poor birds had no door for 3 days straight. Every morning I’d hear the rooster crowing as I went to my car and I’d be thankful that a fox hadn’t gotten them all overnight.

So this weekend, during naptime, we made a new door. 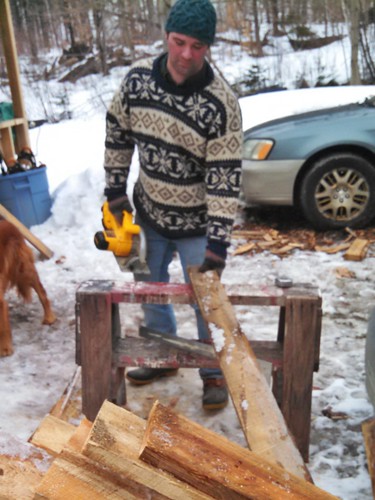 This is a rustic “barn board” door that Neil and I agreed some hipster would probably pay good money to have. But for us, it’s something we could slap together entirely with supplies we have on hand. The rough cut 1×4’s and 1×6’s are cheap lumber we have left over after fixing the roof last summer. 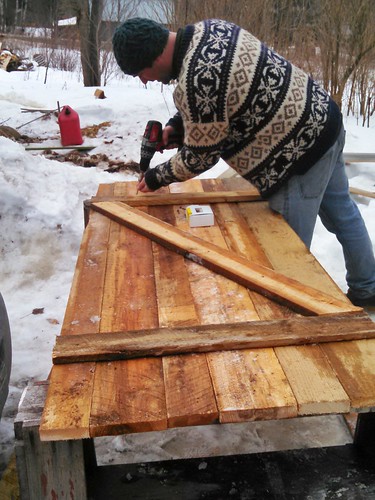 Neil had to literally dig the lumber out of a snow bank with a shovel. Then we had to scrape ice off the sides to get it to lie flat so we could line everything up. And let’s not forget that we had to take 1″ off the width at to bottom because the amateurs who built our coop (oh yeah, that’d be us) didn’t quite frame the door square… I like to pick on us, but mostly I’m proud we built this thing 7 years ago and it hasn’t fallen over or blown down yet! 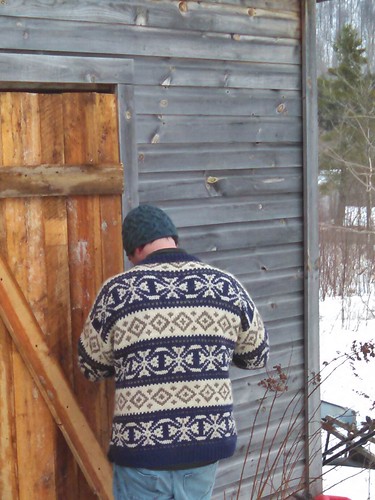 It was a cold, blustery way to spend our saturday afternoon. Although it was better than the sleet we had on sunday. At least by then the chickens had a new door, so their deep layer shavings stayed fluffy and dry. And after building a whole door from scratch we did feel pretty accomplished!

*ok, chickens don’t have the brain power for that. But they DO look at the snow like it’s an alien substance that they’d rather not touch, thankyouverymuch.

Not how they usually look

The pencil by the egg tray was meant for dating the eggs as we collected them. We get a lot of eggs this time of year, and it can help to know which ones are oldest.

But Neil got bored, and this happened. 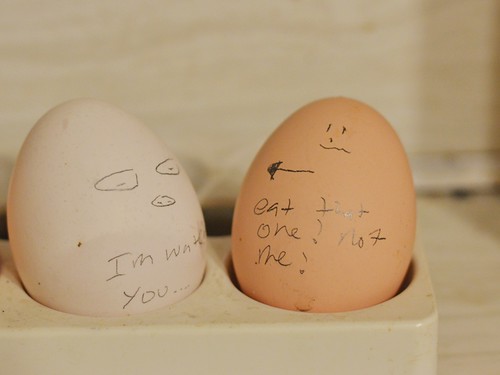 And my breakfasts have taken on a slightly murderous feel… 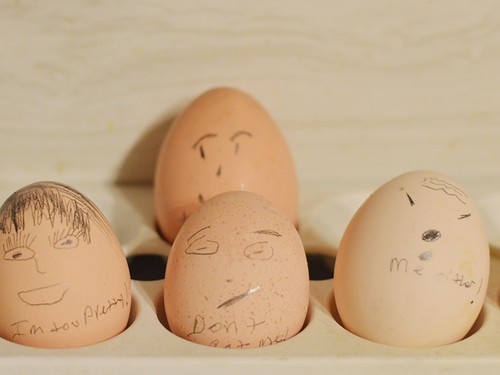 Spring is here, the early version of it anyway. The last of the snow lies in dirty piles, hiding in the shadows. 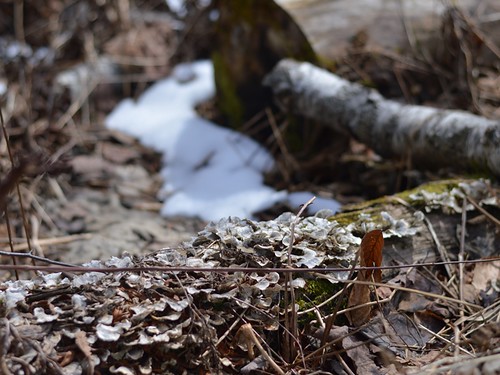 The chickens are so happy to be outside again! My breakfast eggs have turned from sunny winter yellow to vibrantly orange. Which is a delicious sign of spring. 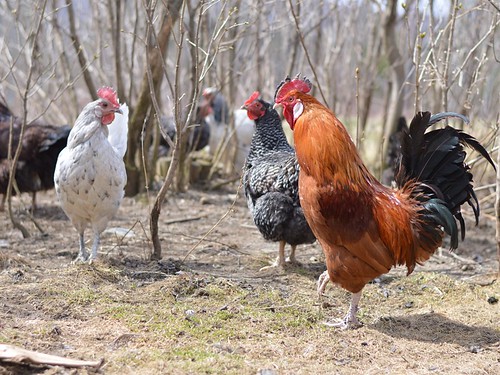 And finally, the morning sunrise has almost caught up with my alarm clock (again). It had just barely caught up when daylight savings time pushed it back. So I’m relieved to have it back again. What signs of spring are popping up where you live?

It’s been a bad summer for our chickens, we’ve lost four hens since spring. I’m not entirely surprised, the batch of chicks we got when we moved in (spring 2008) are 5 years old now. And while chickens can live to be 10 or more, 5 or 6 seems to be when the mysterious diseases begin to pick them off…

Luckily the new ladies are all doing fine, we still have the four Zibbleses

Ok, that’s just two, but have you ever tried to herd chickens? We can’t tell The Zibbleses apart, hence the name… We also have two white ladies

If you’re like me, you don’t believe that one in the back is a hen. I’ve spent 6 months claiming she was a very confused roo. But last weekend we watched her lay an egg, so I guess I have to adjust my thinking…

Those six birds? When we adopted them we were told they’re straight run. So these six hens must be a balance for all those occasions when “straight run” really means 75% roosters…

And we still have plenty of old ladies running around, laying the occasional egg and keeping the bugs down.

But honestly? The flock is suddenly down to 10 birds, and I’m starting to wonder if I can pick up a hen or two off craigslist…

The chickens have been LOVING the recent spate of sunny weather. The grass and other plants are green and tasty. The bugs are out, the dust baths are dusty. Really, what more could a chicken ask for?

I love watching these ladies, they’re better than TV (although some days that’s not hard).

I’m a bit sad that we have no chicks this spring. But it’s for the best. Neil and I agreed that trying to process meat birds when I’m 7 or 8 months pregnant would not be a brilliant plan if we could avoid it. My mom agreed, so my parents ordered some extras this year to make up the difference.

And we have no layer chicks either. The addition of 5 young hens last fall means we have an ABUNDANCE of eggs right now.

We’ve gotten 16 in the last two days. I’m probably eat 3 eggs a day but we just can’t keep up with them! It’s a good problem to have, mostly.

Growing up with chickens I know we gave them calcium supplements from time to time. I remember the bags of oyster shells. That’s not something we’ve had to worry about much with our birds. I sometimes wonder if it means there’s more calcium in the soil (and thus the plants) that our Vermont birds forage for all summer.

But in the winter sometimes the birds get thin egg shells. There is calcium in their pellet food, but it can be a good idea to give them additional calcium, which they can choose to eat if needed. Instead of buying oyster shells Neil and I decided to try something different.

Eggshells. Clearly this is why the layers need so much calcium. Why not give it back to them when we’re done with those eggs? First I dried the shells at 200F in my oven for about an hour. Then I put them all in a plastic bag and crushed them up fine.

This does several things. Cooking the eggshells dries up any remaining moisture, and probably should kill any bacteria*. Crushing them makes it easier for the birds to eat. It also makes the shells not look like egg shells anymore. The last thing I want to do is give my birds the idea of eating eggs…

All those eggshells above (about 2 weeks’ worth at 4 eggs a day, so maybe 50 eggshells total) gave me somewhere between 1 and 2 cups of calcium supplement. Which I put in a tray (separate from their food) over by where the birds like to lay their eggs. We’ll see if they like it, or just spill it everywhere…

*not that there should be any bacteria since we wash them when they come in from the coop. But it can’t hurt.

The snow pack outside is looking pretty soggy, because it’s been above freezing for more than 24 hours. The rain on Sunday didn’t help much either.

January thaws are to be expected, what with it being January and all. It was a perfect weekend for opening the double doors long enough to get the Christmas tree out of the living room.

It was also the first weekend in months that the chickens actually deigned to come out of the coop and stand around in the muddy bits of exposed ground. So we all enjoyed a bit of a respite from the winter. But I hope it doesn’t last too long. I still want to get some more snow-shoeing in before spring!